Posted by MtMotorStables at 3:20 PM No comments: 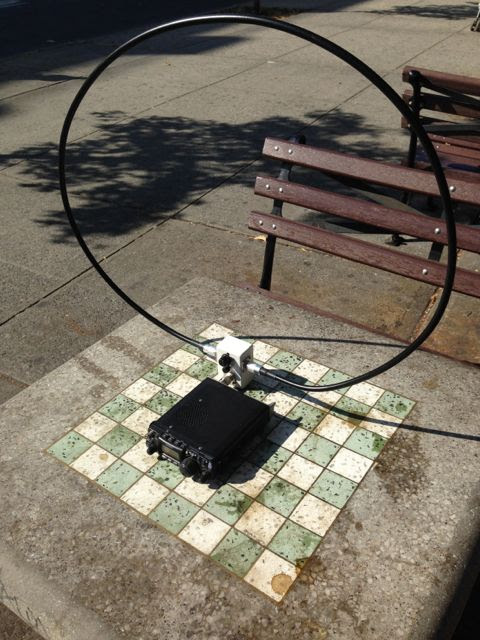 Disclaimer: if not all precautions are taken, Magnetic Loops can be dangerous.Tensions in excess of a few KV’s can and will develop even when operating at relatively low powers. Fires can also develop .Never ever touch the loop radiator during transmissions!Moreover, the magnetic fields generated by these antennas are potentially harmful to a number of individuals, or even to yourself.This page is for illustrational purposes only: I take no responsibilities from the harm or damage that might result from your attempts to replicate this work.

Imagine you live in a place like New York City and you want to do some radio. Chances are you might run into some of the same problems I had to face. They are:
#1: No antennas are allowed on the roof. You can’t even access the roof!#2: Like most of the other New Yorkers, I live without a car therefore no mobile operations are possible.#3: Over here we live face to face, shoulder to shoulder. Portable operations are possible but – for the most part of the city – forget about dipoles, random wires, end fed antennas, counterpoises and such… Forget about wires in general. This is New York City, there simply is no room to hang stuff around.
So, whats the solution to this mess? Here it is: 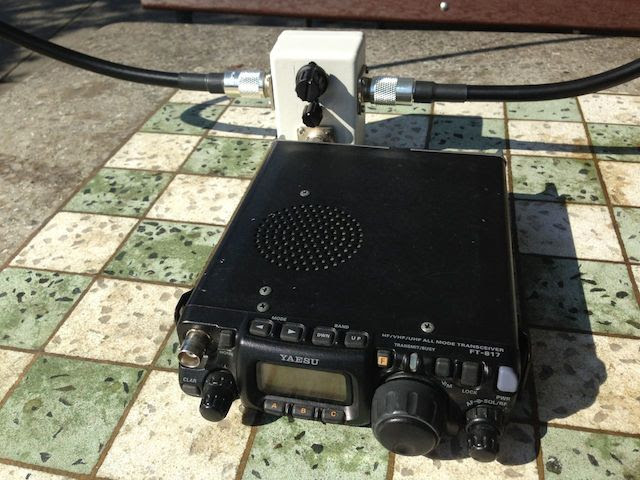 Welcome to the magic world of magnetic loops! If you tried a loop already, then I don’t need to explain how efficient, quiet and incredibly small these antennas can be. In my specific case, this table top loop allows operations from busy Manhattan parks, Tennis courts, once I even used it in a Starbucks!
In the past I made slightly bigger ones (say 3 feet in diameter) that were better performing especially in the lower bands but they required to be supported by PVC tubing. Who wants to carry PVC around on a bicycle?!?  I said to myself: it has to be even smaller… so I made this one. It’s so small it doesn’t seem to be real… but it is! Check this video out (thanks K2COW):
Check out the /PM logbook from the past few weeks. Consider I run between 1 and 3 watt and I  only operate around 1-2 hours at a time:

The kit travels in a custom cut hardcase and other than the antenna itself  it includes an FT-817ND with a modified internal LiPo battery, another external LiPo, a homemade USB audio interface (for PSK31 and JT65), a V/UHF vertical, the mic, a CW key and my FCC license. (Why do I carry the license? It happened twice that people called the cops on me, so I better have it ready for next time it will happen) You might have noticed that contrary to general construction principles the loop is not inductively coupled. In facts, I wanted to try a capacitively coupled one (aka army loop) because the latter does not require a coupler loop. Also, this loop is a bit smaller than I wish it was. The main idea behind this design is trading some of the performance in exchange for maximum portability.
If you kept reading down to this point you really must be interested in this so lets take a look inside! Here is the schematic diagram: 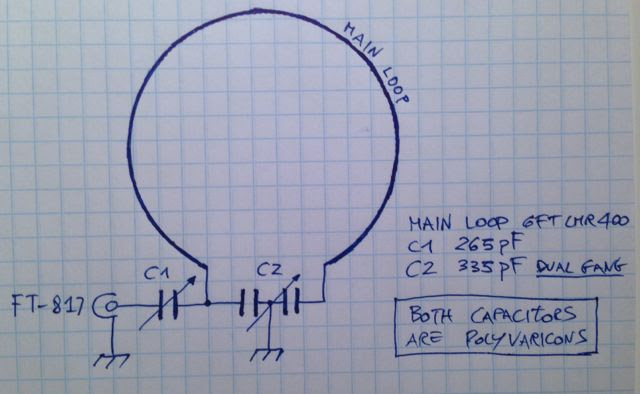 And this is how I actually built it: 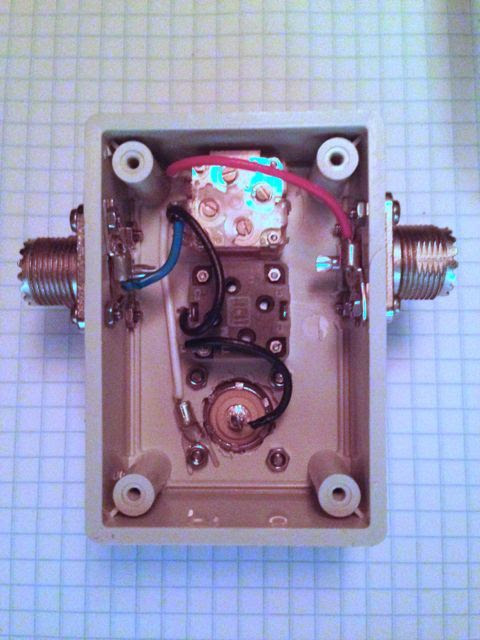 Both capacitors I used are polyvaricons. I got the single gang on Ebay for about $8 and the other one (dual gang) from  Scott’s Electronic. I believe they could resist without arching up to 10Watts (I did not try that) but they work just fine with the FT817 at 5Watts. The white enclosure is an Hammond 1594BSGY while the coax loop is composed of 6ft of LMR400 cable (NOT the Ultra-Flex version).
In this configuration the loop can operate from 30 to 10 meters. Using a two spires radiator of the same diameter it also covers 40 meters. I haven’t had a chance to check this antenna with a proper analyzer. All I know is that – depending on the band and the surroundings – SWR tends to be between zero and three bars on the FT-817 SWR meter. I also know that I had a few transoceanic contacts on 10, 15 and 20 meters in CW, FM, USB and JT65 modes. All of them using tiny LiPo batteries and Powers in the range of 2-3 Watts!
This is QRPp done using a microscopic antenna and, it goes without saying, it takes a lot of patience constance and curiosity. Sometimes I come home with nothing it the log. The day propagation goes up and I do DX.Results are unpredictable, and that’s the beauty of it!
Posted by MtMotorStables at 3:40 PM No comments:

Wilderness Protocol for Emergencies on 146.520 MHz

WA9STI
11h
Since March of 2014 when I became active in SOTA, I have not seen any postings about the Wilderness Protocol for 146.520 MHz simplex. I have found many new hams are not aware of it. So unless I have missed something on the website, perhaps now is a good time for a review. The Wilderness Protocol is basically a schedule for transmitting and receiving on the national calling frequency of 146.520 MHz FM simplex when one is in the backcountry and requires assistance or communication where there is no repeater or cell phone coverage. The protocol works as follows: Beginning at 0700 hours local time until 2200 hours, every three hours (0700, 1000, 1300 etc.) from the top of the hour until five minutes past the hour, one can put out a call on 146.520 MHz if they need assistance. This way one can conserve the battery in an HT. If a search and rescue (SAR) team is looking for someone, knowing when they would be transmitting would be useful. However for the protocol to work, others who are in the backcountry should also listen during the five minute increments to ascertain whether anyone is calling. Even if neither party is in an emergency situation, it is not a bad idea to find out who might be within radio range of you by putting out a general call during the five minute window. In my pre-SOTA backpacking days in the Sierra Nevada Mountains of California, I have put out calls during the protocol times and more than once linked up with another backpacker several peaks over. The Wilderness Protocol is not something I made up. One can do an Internet search and find numerous hits. While the protocol advises making transmissions on the calling frequencies for other VHF and UHF bands, I believe that 146.520 MHz would work best since most everyone has a 2 meter HT. Every time I leave a hiking plan with my XYL (KB6LAS) when I am going on a solo activation, I list that I will be adhering to the Wilderness Protocol. The protocol along with tracks of my APRS beacons and history of activation spots on sotawatch.org give me peace of mind that should a misfortune occur when I am on a SOTA, there would be a way for a SAR team to locate me.
On another topic of 146.520 MHz, there is a lot of 2 meter simplex activity where chasers are looking for activators in Southern California. While I have made my share of contacts on 146.520 MHz when I am on a summit, I try not to dominate the national calling frequency from a high altitude location to the exclusion of everyone else who may not be interested in SOTA. Therefore if I want to make a 2 meter SOTA contact, I may put out a call on 146.520 but then advise that I will be listening on either 146.550 or 146.580 MHz. When I post an alert of an upcoming SOTA, in the notes section I list that I will be monitoring 146.580 MHz. Therefore while I am making HF contacts from the summit, I can have my HT on 146.580 MHz in the background and any chaser or nearby activator looking for an S2S can call me at any time without me having to post a separate spot for 2 meters. It is much easier to listen to a generally quiet 2 meter frequency while on HF than the usual traffic one might hear on 146.520 MHz.
73 de Scott WA9STI
Los Angeles, CA and Eagle River, WI
Posted by MtMotorStables at 1:33 AM No comments: