So, former FBI lawyer Lisa Page declined to testify before a congressional committee because she didn’t feel like it. Apparently we’re now a rule-of-law-optional nation. Until recently, we were merely reality-optional. That was fun, but when officers of the country’s leading law enforcement agency go optional on standard legal procedure, like answering subpoenas, then we’re truly in the land where anything goes (and nothing matters).
After two years of Trump-inspired hysteria, it’s pretty obvious what went on in the bungled Obama-Hillary power handoff of 2016 and afterward: the indictable shenanigans of candidate Hillary and her captive DNC prompted a campaign of agit-prop by the US Intel “community” to gaslight the public with a Russian meddling story that morphed uncontrollably into a crusade to make it impossible for Mr. Trump to govern. And what’s followed for many months is an equally bungled effort to conceal, deceive, and confuse the issues in the case by Democratic Party partisans still in high places. It was very likely begun with the tacit knowledge of President Obama, though he remained protected by a shield of plausible deniability. And it was carried out by high-ranking officials who turned out to be shockingly unprofessional, and whose activities have been disclosed through an electronic data evidence trail.
Mr. Trump’s visit to confer with Russian President Putin in Helsinki seems to have provoked a kind of last-gasp effort to keep the increasingly idiotic Russian election meddling story alive — with Robert Mueller’s ballyhooed indictment of twelve “Russian intel agents” alleged to have “hacked” emails and computer files of the DNC and Hillary’s campaign chairman John Podesta. The gaping holes in that part of the tale have long been unearthed so I’ll summarize as briefly as possible:
1) the bandwidth required to transfer the files has been proven to be greater than an internet hack might have conceivably managed in the time allowed and points rather to a direct download into a flash drive device. 2) the DNC computer hard drives, said to be the source of the alleged hacking, disappeared while in the custody of the US Intel Community (including the FBI). 3) the authenticity of the purloined emails by Mr. Podesta and others has never been disputed, and they revealed a lot of potentially criminal behavior by them. 4) Mr. Mueller must know he will never get twelve Russian intel agents into a US courtroom, so the entire exercise is a joke and a fraud. In effect, he’s indicted twelve ham sandwiches with Russian dressing.
Tragically, the American public is led to take this ploy seriously by a morally compromised news media, especially CNN and the The New York Times. The latter outfit is so afflicted with a case of the Russian meddling vapors that it ran this laughable headline at the top of its front page yesterday: “Just Sitting Down With Trump, Putin Comes Out Ahead.” Gosh, what’s the message there? Don’t even bother talking to foreign heads of state, especially in the interest of improving relations?
The salient question that persons in authority might ask out-loud is how come so many officers of the Intel Community have not been hauled in front of grand juries to answer for their obviously incriminating behavior. Mr Mueller is perhaps too busy chasing Russian phantoms to draw up a bill of particulars against characters such as former CIA chief (now CNN shill) John Brennan, who apparently orchestrated the early chapters of the Russian meddling ruse, Bruce and Nellie Ohr, who ushered the DNC’s Steele Dossier into the FBI’s warrant machinery, fired FBI Deputy Director Andrew McCabe, who managed the Steele Dossier and its spinoff mischief as an “insurance policy” against Mr. Trump, Peter Strzok, who executed the “insurance policy,” and, of course, Ms. Page, his paramour, who decided that testifying before Congress was beneath her dignity. These and probably many others.
Tragically, also, these matters can only be fully corrected by the very Department of Justice that includes under its management the rogue FBI. Who else can formally and legally bring these cases before grand juries? The DOJ appears intent on preventing that from ever happening. Congress has so far omitted enforcing its subpoenas or using its impeachment power to dislodge obdurate DOJ officials. Mr. Trump, for now apparently, has declined to use his inherent executive powers to clean out this rats nest, say by removing secrecy shields from many of the documents at issue in the DOJ’s possession — most likely because he can’t afford to be seen “meddling” in the tangled proceedings. The net result of all this subterfuge, inaction, and gaslighting, is the defeat of the rule-of-law generally in American life. This ought to be taken seriously. If it’s asking too much of the system, then the system itself will eventually not be taken seriously, and that will be the end of the republic as we knew it.
Postscript:  I’m advised that Lisa Page did finally testify in closed session while I was out of the country last week. However, it took an extraordinarily long time for her to comply with the request, as detailed in this Tweet from Rep. Mark Meadows. 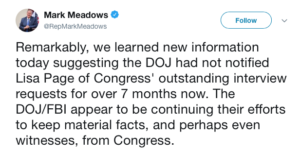 Post-postscript: Cable TV turned into a madhouse Monday night with CNN’s Erin Burnett and MSNBC’s Chris Mathews beating the war drums like Comanches waiting on a wagon train. Putin, they screamed, is the criminal head of a hostile foreign power. If they say so, it must be true. John Brennan, ex-CIA chief, calls Mr. Trump’s behavior  “treasonous” for doubting the veracity of seventeen intelligence agencies. To me, that suggests that the US has got too many intelligence agencies and that they may be a bigger threat to liberty in America than anything that Russia has done or is doing to us.

Posted by MtMotorStables at 6:30 PM