John Carlin was an Assistant Attorney General – and Head of the Department of Justice’s National Security Division (NSD).
On September 27, 2016, Carlin announced his resignation. He formally left the NSD on October 15, 2016. Carlin had been named Acting Assistant Attorney General in March 2013 and was confirmed in the spring of 2014.
Carlin had previously served as chief of staff to then-FBI Director Robert S. Mueller.
Carlin was replaced with Mary McCord – who would later accompany Acting Attorney General Sally Yates to see White House Counsel Don McGahn regarding General Michael Flynn.
Carlin announced his resignation exactly one day after he filed the Government’s proposed 2016 Section 702 certifications. His signature can be found on page 31.
Section 702 is part of the broader FISA Act and permits the government to target for surveillance foreign persons located outside the United States for the purpose of acquiring foreign intelligence information.
Instead of issuing individual court orders, Section 702 requires the Attorney General and the Director of National Intelligence (DNI) to provide the Foreign Intelligence Surveillance Court (FISC) with annual certifications that specify categories of foreign intelligence information the government is authorized to acquire pursuant to Section 702.
The Attorney General and the Director of National Intelligence must also certify that Intelligence Community elements will follow targeting procedures and minimization procedures that are approved by the FISC as part of the annual certification.
The National Security Division and Office of the Director of National Intelligence (ODNI) are jointly required to routinely review all Intelligence Agency U.S. person queries of content to ensure the Section 702 queries satisfy the legal standard.
The NSD – with notice to the ODNI – is required to report any incidents of Agency noncompliance or misconduct to the FISA Court.
For a more complete discussion see, FISA Surveillance – Title I & III and Section 702.
At the time Carlin’s sudden resignation went mostly unnoticed.
But there was more to the story.
Here is the official explanation as provided by the Office of the Director of National Intelligence:
After submitting its 2016 Certifications in September 2016, the Department of Justice and ODNI learned, in October 2016, about additional information related to previously reported compliance incidents and reported that additional information to the FISC. The NSA also self-reported the information to oversight bodies, as required by law. These compliance incidents related to the NSA’s inadvertent use of U.S. person identifiers to query NSA’s “upstream” Internet collection acquired pursuant to Section 702.
The FISA Court was more direct in a 99-page April 26, 2017 unsealed FISA Court Ruling.
On October 24, 2016, the government orally apprised the Court of significant non-compliance with the NSA’s minimization procedures involving queries of data acquired under Section 702 using U.S. person identifiers. The full scope of non-compliant querying practices had not been previously disclosed to the Court. Two days later, on the day the Court otherwise would have had to complete its review of the certifications and procedures, the government made a written submission regarding those compliance problems…and the Court held a hearing to address them.
The government reported that it was working to ascertain the cause(s) of those compliance problems and develop a remedial plan to address them. Without further information about the compliance problems and the government’s remedial efforts, the Court was not in a position to assess whether the minimization procedures would comply with the statutory standards and were consistent with the requirements of the Fourth Amendment.
But that still doesn’t begin to describe the breadth and scope of what occurred.
It wasn’t the Obama Administration that self-disclosed before the FISA Court on October 24 and 26, 2016.
It was National Security Agency Director Admiral Mike Rogers. And he deserves a medal for his efforts.
Here’s what actually happened:
On January 7, 2016, the NSA Inspector General, George Ellard, released a report on NSA Controls & FISA compliance. Starting on page ii:
Agency controls for monitoring query compliance have not been completely developed.
The Agency has no process to reliably identify queries performed using selectors associated with 704 and 705(b) targets.
The rest of the highlights are fully redacted. But more information lay within the report (pages 6-7):
We identified another [redacted] queries that were performed outside the targeting authorization periods in E.O. 12333 data, which is prohibited by the E.O. 12333 minimization procedures. We also identified queries performed using USP selectors in FAA §702 upstream data, which is prohibited by the FAA §702 minimization procedures.
Downstream collection involves the government acquiring data from the companies providing service to the user – like Google or Facebook.
However, some Section 702 collection is obtained via “upstream” collection.
In simple parlance, upstream collection means the NSA accesses the high capacity fiber optic cables that carry Internet traffic and copies all the data flowing through those cables.
The agency is then supposed to filter out any “wholly domestic” communications that are between Americans located in the U.S.
Data collected “incidentally” on U.S. Citizens is generally not destroyed. It is minimized. As we will see later, this became a problem.
Intelligence Agencies can then search the data using “To”, “From” or “About” queries on a target of Section 702 collection.
“About” queries are particularly worrisome.
They occur when the target is neither the sender nor the recipient of the collected communication – but the target’s selector, such as an email address, is being passed between two other communicants.
For more information see, FISA Surveillance – Title I & III and Section 702.
“About” queries were abruptly halted by NSA Director Mike Rogers on October 20, 2016. This was formally announced by the NSA on April 28, 2017.
The events leading to this decision are described in this post.
Which brings us to a table from the Inspector General’s Report.
Table 3 (page 7) shows four types of violations. The most frequent violation – 5.2% of the total – came from Section 702 upstream “About” queries. 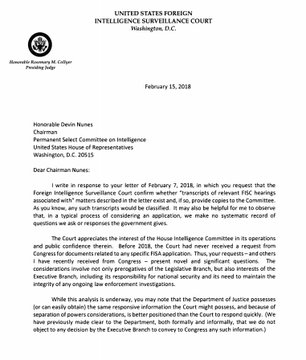 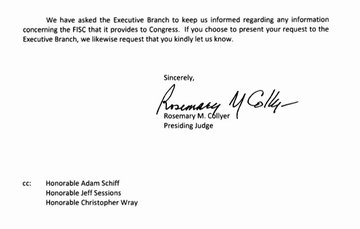 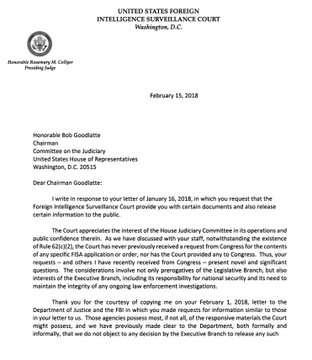 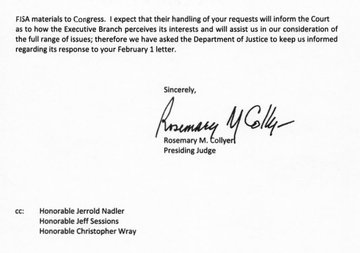 Zoe Tillman ✔@ZoeTillman
New: The Foreign Intelligence Surveillance Court just released letters to Nunes and Goodlatte re: their requests for FISC records. Judge said the requests are a first for the court, and it's considering them. To Nunes: http://www.fisc.uscourts.gov/sites/default/files/Presiding%20Judge%20Rosemary%20M%20Collyer%20response%20to%20Chairman%20Nunes%20180215_0.pdf … To Goodlatte: http://www.fisc.uscourts.gov/sites/default/files/Presiding%20Judge%20Rosemary%20M%20Collyer%20response%20to%20Chairman%20Goodlatte%20180215_0.pdf …

Twitter Ads info and privacy
The Court is considering the requests…
I first wrote about this Court Ruling in January but realized I failed to adequately tell the larger story.
It’s difficult to fully convey or appreciate Director Mike Rogers’ actions. He quietly stood against a deeply embedded Intelligence apparatus and risked his reputation and career.
He also performed a delicate balancing act. His actions would be of no merit if he was not in a position to see his disclosures through.
Although it may take some time, it is my hope that his role will be more fully appreciated.
It’s entirely possible there would have been no FISA disclosure without the 2016 actions of Rogers.
There might have been no investigation by Inspector General Horowitz.
James Clapper was the architect of the Russia Report – Assessing Russian Activities and Intentions in Recent U.S. Elections. It was used to push the entire Russia Narrative (see here).
The report was technically created by a joint effort between the CIA (former Director John Brennan), FBI (former Director James Comey) and the NSA (current Director Mike Rogers) – and assembled by the DNI (former Director James Clapper).
The joint report contains one significant caveat:
CIA and FBI have high confidence in this judgment; NSA has only moderate confidence.
Rogers stated in Senate hearing testimony that his confidence did not reach even this threshold:
I wouldn’t call it a discrepancy, I’d call it an honest difference of opinion between three different organizations and in the end I made that call.…It didn’t have the same level of sourcing and the same level of multiple sources.
Admiral Mike Rogers quietly announced his retirement in early January 2018, thus bringing an end to a nearly four-year tenure as head of the NSA. He will formally retire this Spring.
Which is somewhat remarkable given the Obama Administration tried to fire him well over a year ago.
In a following post I will be examining some significant events and circumstances that may have resulted from the Section 702 FISA abuses discussed in this post.
newer post  Nunes’ FISA Application Access & the Difference Between Phase II & III